With 2103 this feature is back! So it was fun to hack the database but better to upgrade to 2103 and get this feature back supported!

First of all! This is unsupported! Doing this you will risk breaking stuff if done wrong and I will not be accountable for that! Use at own risk! GSS will hunt you down and slap you in the face if you use this in production. You have been warned!

App Volumes 2.x had the option to set an App Stack created on like Windows 10 also compatible with another OS. With App Volumes 4 this is not possible anymore… When packaged on Windows 10 you cannot mount this App on a 2016 RDSH server. While this has it’s reasons it kinda bummed me out. This means you have to do the App Stack dance per OS you want to support.

While this was possible in 2.x it was not recommended. There are no guarantees it works and was nice to have.

It’s all in the database

With App Volumes, all information is stored in a SQL Database. It did not take much time to find out that operating_system_id holds the value of the OS it was packaged on. So I created a Server 2016 VM and created an App Stack with VLC. In the database, this App Stack got operating_system_id 14 where Windows 10 has id 2. I was able to mount this on a 2016 server but not on a Windows 10 VDI. So I started changing the id from 14 to 2 and tried mounting it on a Windows 10 VDI. Took a few tries to find out that there are 3 tables that need changing and voila! The on the Server 2016 created VLC App Stack now mounts on a Windows 10 VDI! 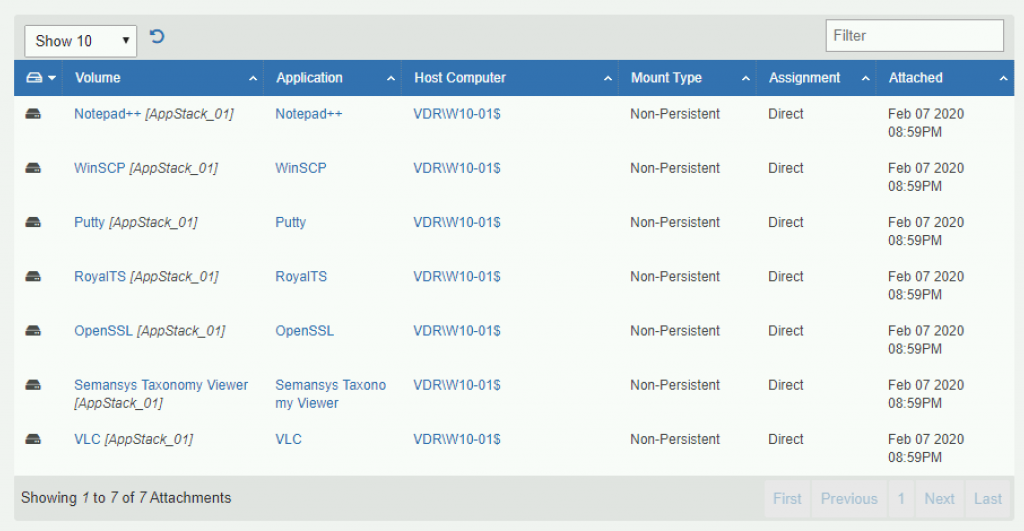 The App stack with id 2.

The same App Stack with id 14.

The operating_system_id can be found in the 3 tables below:

I have tested a few options and found out all id’s.

Haven’t found the “all OS” switch if it exists. But I found a way to link a 4.x App Stack to multiple OS versions!.

To get this working you will need to manually insert some stuff in the 3 tables I talked about before saying that the same App Stack also holds id 2 and 14. This is how it worked in the 2.x days!

Also, this makes it’s possible to clone the App Stack VMDK and change the id to allow it on another OS. Safes the time of doing the stack dance for multiple OS but still, NOT SUPPORTED 🙂