DHL presented its newest drone, the Parcelcopter 3. The drone with rotary wings can take off vertically and then at about 30 or 40 meters height turn the wings and move forward. This is the VTOL principle. 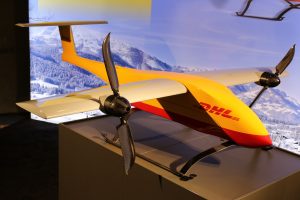 With this technique, the drone should be able to fly faster than the previous two drones which DHL conducted tests with. The drone does its flight autonomously, including take off and landing in the specially built ‘skyports’ at the beginning and end of the route.

The test route that DHL used to Parcelcopter three runs in southern Germany, Reit im Winkl on Winklmoosalm at 688 meters to 1154 meters height, over a distance of 8.3 kilometers. The drone does, depending on weather conditions, around 6 to 9 minutes for this trip. The drone has an average speed of 70km / h. The maximum speed is 126km / h at an altitude of at least 80 meters above the ground. The drone itself measures 2 to 2.2 meters and can take up to two kilograms of cargo, which weighs the drone up to 14kg. The body is made of a composite carbon fiber.

The Parcelcopter 3 uses different, independent systems operating to fly, so that nothing goes wrong if a system should fail, but it is also being watched by people. What kind of sensors used the drone to choose his path, DHL did not mention, just that there’s GPS inside. The drone has no onboard cameras to determine its direction, if DHL did say that sometimes a camera put on for ‘testing’. The flight path between the two skyports is also provided certain guidance systems, but these are in accordance with DHL technically not necessary to choose the right path.

For independent loading and unloading DHL also developed a special landing building: the Skyport. The Skyport change the container with up to 4.4 liters automatically. The roof of the Skyport may within three minutes open and close. The entire building measuring 3.5 by 5.5 meters. Each Skyport can contain up to five containers.

The purpose of the Skyport is otherwise hard to reach areas to achieve faster, hence the test site in the Alps. Users can place the container itself in the Skyport or pick them up so that the system is fully automatic. All this should, in principle, under almost all weather conditions may continue to function, but unfortunately this was not the case for the press conference. What was the exact reason is not known. The organization kept it on the weather quickly turned. Remarkably, or the selection for a demonstration in the middle of January. 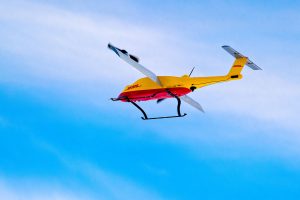 DHL has put its goal to deploy the parcelcopter in other parts of Europe or the world. In Germany it is possible to use special ‘flight corridors, but such laws and regulations are different in every country. If and when such concerns chaperones in urban areas will do their work, is also not yet clear. DHL wanted to say that this is probably very practical in the future, because delivery trucks very slow moving and delivering packages therefore is slow. Another reason to use a drone is safety. The CEO of mail and e-commerce DHL Jürgen Gerdes gave the example of Sao Paolo in Brazil. Since helicopters are used to move packets, because the night is too dangerous to drive through the streets and “day actually. Asked whether DHL can feel the breath of Amazon in his neck, Gerdes reported that DHL, the competition takes very pleasant and it is Amazon’s most important partner in Germany when it comes to delivery. Also, according to Gerdes would would not be logical for Amazon in Germany will do what DHL.