The Vortex 180 is the newest race drone from ImmersionRC.
It’s the big brother of the popular Vortex 150, tuned for the track. The same highly-customized race-drone electronics, but with 4″ props, and custom XNova 1407-3500kV motors. The 150 was a lot of fun in confined spaces. The 180 is more at home on the track, incredibly fast and nimble, turns on a dime, and can give most 250-sized quads a run for their money. As with all members of the Vortex family, fully integrated flight controller, video transmitter, and of course a full-graphic OSD for PC-free configuration.

Coming in below 270 gram the Vortex 180 is not considered a ‘drone’ in many parts of the world. This allows the Vortex 180 Mini to be flown in many more places than its big brother the Vortex 250 Pro. Doors are opened to fly in a typical garden, or small park. A swing-set becomes a perfect power-loop target and garden furniture becomes a race gate, a new world of possibilities has just been opened up!

I would like to thank Droneshop.nl for suppling this Vortex 180 to test, review and making me one of the first in the Netherlands to have this racer in my dutch hands.
Droneshop.nl is the one stop shop for all your drone needs in the Netherlands!
Looking for parts or ready to fly drones? Just hop over to the website and take a look.
These guys know their drones and have great customer service! 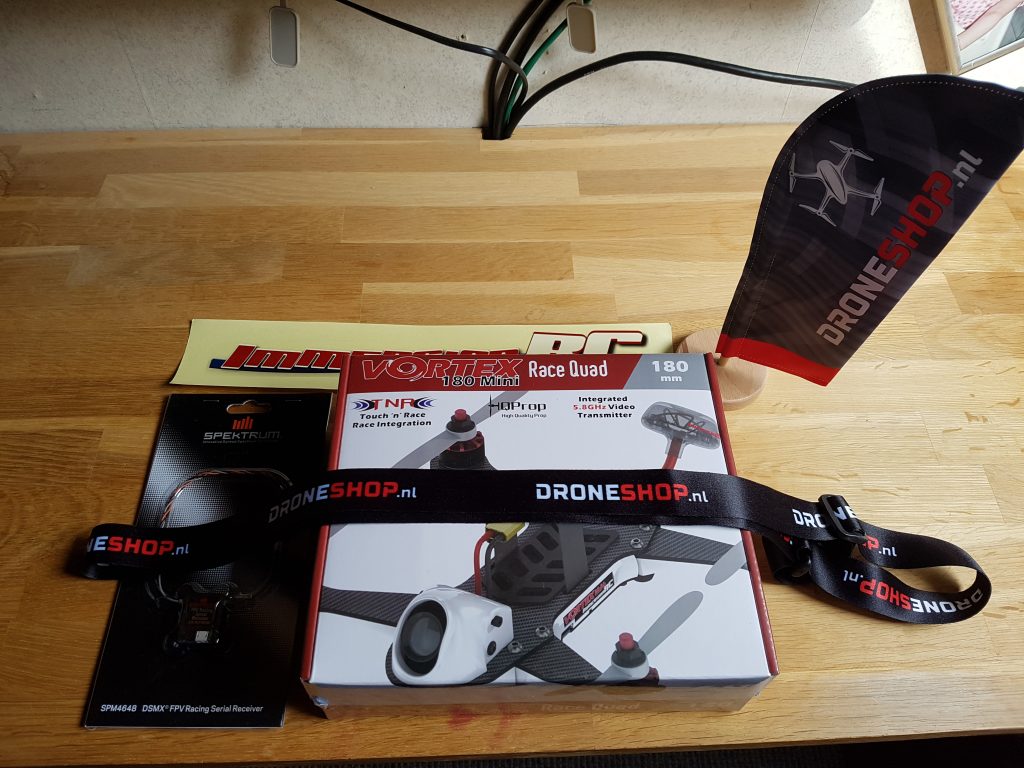 Want a Vortex 180 and Spektrum setup? Click below and order them! Then follow this review/guide to get setup and flying.

Included in the box is:

The following table demonstrates the differences:

(1) Any similarly sized receiver will fit in the 150’s Internal Rx Bay, larger receivers can fit outside.

Next to it’s bigger size compared to the Vortex 150, the Vortex 180 also has the same big change being that the battery lead is not a XT60 connector but the XT30! This is done for weight reduction. So be aware when you buy the Vortex 180! You will either need to: 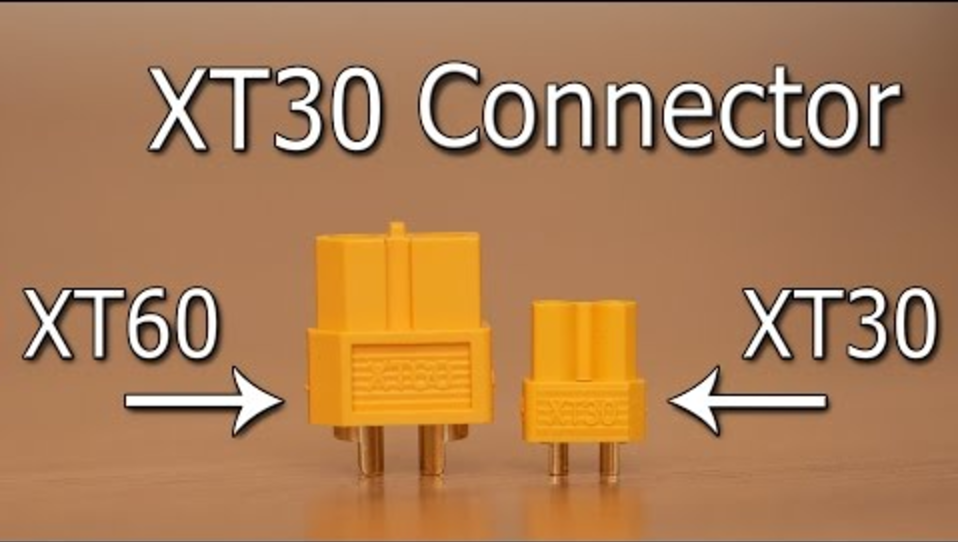 Had some Tattu 850mAh which came with XT60 instead of XT30. They changed the leads without notice and kept the same part number. Did a resolder to XT30 on these. 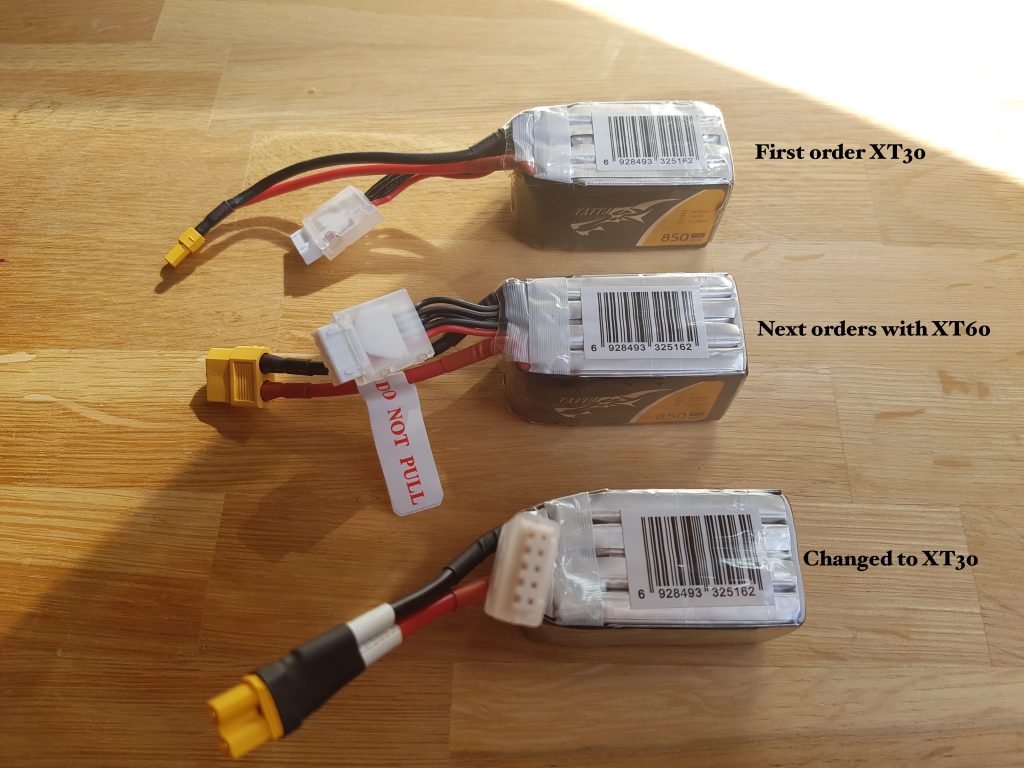 The setup of the Vortex 180 is the same as the 150. See my guide on how to set it up with a Spektrum race receiver here or watch my youtube guide below.

Setting up the Spektrum DSMX Quad Race Receiver with Diversity is pretty easy. The Spektrum cable is connected by default in the vortex 180. You need to unscrew the 8 top screws and you have full access to the inside.

Then just plug it in and send the antenna’s through the holes in the casing. As you see the receiver SPM4648 fits like a champ and hides perfectly inside.

was fortunate that out of the box i was unable to enter camera osd.

To fix this you need to tweak your osd button voltages. You can find this setting on the second page of the osd under advanced settings. These settings should get you close:
Default levels for FS Race CAM FPV but change the settings to the bold settings.

Guide for some good camera settings!

Like the bigger frame size making it more race-able then the Vortex 150. The motor upgrade to the XNova 1407-3500kV motors makes this racer a real beast. It has immense power.
Price wise compared to the Vortex 150 is the Vortex 180 a real bargin for a ready to race quad.

Other than that the arms are a little longer, has beefier motors and 4 inch props instead of 3 it’s still a souped up Vortex 150 that you can build your own if you buy the motors and the carbon kit 🙂

Think a lot of people would liked to see that the 180 came a little sooner but hey.. these Vortexes are just awesome! My go to bag will now have a Vortex 150 and a 180 in it. Ready to rip any spot to shreds. 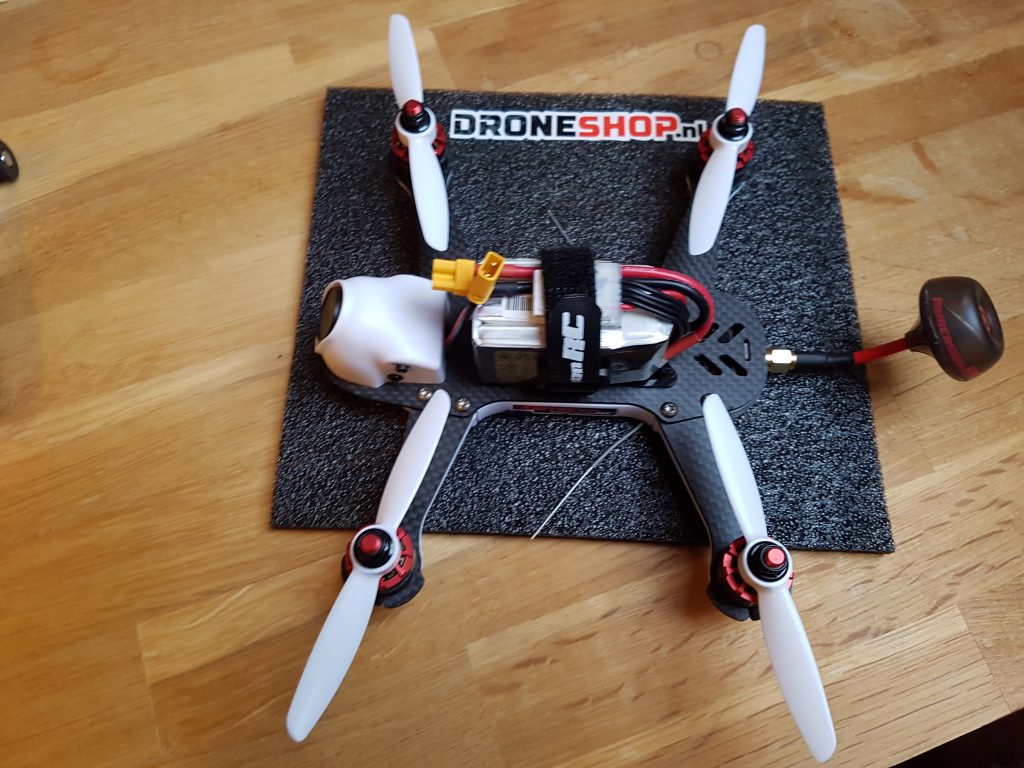 ImmersionRC’s FPV Racing Simulator, LiftOff, has been used by many pilots to develop their skills without breaking a single prop.
Since its introduction the simulator has steadily increased it’s feature set, now including all of the Vortex airframes, many race environments (including the famous Dubai World Drone Prix circuit), and recently a fantastic multi-player mode.
Race against other pilots in multiplayer mode, create tracks with the track builder, and download tracks built by the community.

ImmersionRC has always been a great supporter of the project and good friend of the team at LuGus Studios. Their contribution to the FPV community is unmistakable and their motivation and approach to supporting project like Liftoff is a great example of what we love about the FPV scene in general. It’s not just about racing, it’s about supporting each other, contributing to a community of people who share the same passion. Update 0.10.9 is dedicated to ImmersionRC’s flagship products: the Vortex drones. Not only do we bring a brand new Vortex model to Liftoff, but we are also giving the old Vortex content in Liftoff some much needed attention.