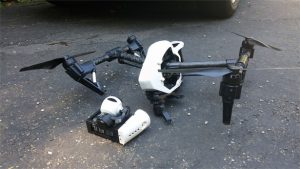 1. CSC in the mid-air (Combination Stick Command)
The newbies favorite way to crash the drone by pulling the sticks to the down inner corners \ / or outside corners / \ and stop the motors
Solution: Never do this movements on a sticks while in the mid-air, unless in case of emergency

2. Propeller shoots off
Of course the self-tightening props is a great invention of humanity, but some of the users only slightly push it till it stops to turn and think that it’s enough, which brings aircraft to shoot the props off on a high RPM
Solution: Never let the propellers loose on a motor. No matter if you are using self-tightening props or quick release props, always make sure that every propeller sits tight on a motor before taking off.

3. RTH Crash
You shooting the beautiful building (tree, hill, tower etc.), and flying behind it for the better shot, suddenly you lose the RC signal, because the building got on the way between the aircraft and the remote controller. So automatic go-home function turns on and your aircraft crashes into that building on a way back home.
Solution: Set your return to home altitude higher than any obstacles (trees, buildings etc.) in your area.
MC settings> Advanced Settings> Failsafe mode

4. Auto landing far from home
Once your aircraft is out power, you will get low battery warning and 10 seconds to cancel the RTH. After canceling the RTH you still can keep flying, but once your battery will hit the critical battery level, aircraft will start auto-landing. Pilot cannot cancel the landing, but the roll, pitch and yaw are still controllable. That’s a good luck if it lands on an opened spot, but if there is a trees or water… you know…
Solution: Go back home straight after low battery warning, don’t force your drone to fly till it’s totally out of power.

5. Flying out of sight
Flying out of sight is pretty dangerous, because all you can see is the video from the aircraft, which limits your view of the environment and can bring pilot to the altitude or direction misjudgment. Also it raises the chances to crash into the objects hard to see through the FPV, such as power lines.
Solution: Do not fly out of the sight if you are not familiar with flight environment.

6. Watching FPV and flying backwards
Everyone likes to do some beautiful shoots like this, but flying backwards we don’t see the way aircraft is moving to, so it’s extremely easy to crash your drone into the other objects on the way. It’s like walking backwards without watching the way.
Solution: Do not stare at the screen all the time, watch your aircraft and flight environment.

7. Indoor flight
Very often flying indoors due to the low GPS signal aircraft can drift, so it is getting difficult for the non-experienced pilot to control it.
Solution: Exercise your ATTI mode flight skills outside, to get the proper feeling of how to fly the aircraft without GPS

8. Failsafe and gain the altitude
As all we know, when the aircraft is out of the 20 meters radius from home point in case of low battery level, it will ascend to the failsafe RTH altitude and then go home. So some of the pilots are getting the low battery warning and go land their aircraft manually without canceling RTH. But since the aircraft is out of the 20m radius from the home point, at that very moment before drone touches the ground it lifts up automatically to the failsafe RTH height, and flies to the home point. This makes a lot of pilots’ panic, so some of them start to do some odd stuff like CSC, and eventually crash their drones.
Also, aircraft can hit the obstacle above it, such as (tree branches, roofs etc.) while automatically raising up.
Solution:
1. Keep calm, your aircraft is not flying away
2. Land close to the home point
3. Cancel the low battery RTH and land manually.

9. Bad environment
Well, the bad environment is a reason of the huge part of the crashes.
What is bad environment? Metropolis full of skyscrapers or any surrounding of the high buildings, Power stations,TV stations, Mobile towers, high voltage lines, any sources of signal or electromagnetic interference.
Solution: Fly in an opened space, far from the buildings, power line towers and all those places described above.

10. Braking distance
Flying aircraft at the full speed is a great feeling, but sometimes you can meet obstacles on a way, that you can crash in just because it’s too late to brake.
Solution: Same as a car, aircraft has its own braking distance, so keep it in mind. It’s better to start soft braking earlier than make an emergency stop with a risk of crash.

Be aware and fly safe!

We found out many RMA cases we have worked on in DJI was caused by pilot’s error.
Analyzing the flight data or so called black-boxes we listed top 10 as above.