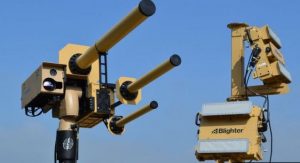 Three British companies have created a device to deter drones from entering sensitive areas by freezing them in mid-flight.

After this disruption, the operator is likely to retrieve the drone believing that it has malfunctioned.

The system joins a host of recently announced technologies which can blast larger drones out of the sky.

A drone flying in sensitive airspace can be detected by the Auds radar and then sighted via a camera equipped with thermal imaging capabilities so that it can be targeted visually.

Then, a high-powered radio signal can be focused on the drone – essentially overriding the connection to whoever is operating it.

The whole process takes as little as 25 seconds, according to the manufacturers.

“It’s a radio signal. There are a number of frequency bands that are used by all of the manufacturers,” explained Paul Taylor of Enterprise Control Systems, which developed the product along with Blighter Surveillance Systems and Chess Dynamics.

“We transmit into those frequencies in the direction of the UAV using a directional antenna,” he told the BBC.

“There’s quite a lot of radio power on to the UAV – so much so that it can only hear our Auds signal.”

The Auds operator can then choose to freeze the drone just for a short time – to convince its owner that there’s something wrong with it – or for a longer period, until its battery dies and it crashes.

Auds has been tested in the UK, the USA and France, said Mr Taylor, and government organisations in all three countries had been involved in those tests.

The US Federal Aviation Authority (FAA) is now receiving around 100 reports per month from pilots who have sighted drones within a five-mile radius of their aircraft.