Within Veeam v9 there are a couple of new nifty features.
Below are 2 new features that are very useful on remote site’s, but not really big mentioned on internet.  a quick recap below and more info on these parts, follow the links.

To interact with the VM guest OS during the backup or replication job, Veeam Backup & Replication needs to deploy a runtime process in each VM. Guest OS interaction is performed if you enable the following options in the job:

Previously, the runtime process on all VMs was deployed by the backup server. This could cause the following problems:

The mount server is required if you perform restore VM guest OS files and application items to the original location. The mount server lets you route VM traffic by an optimal way, reduce load on the network and speed up the restore process.

For example, if the backup server is located in the local site while the source host and backup repository are located in the remote site, during restore to original location Veeam Backup & Replication will route data traffic in the following way: 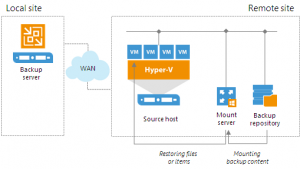 More info on The Mount Server